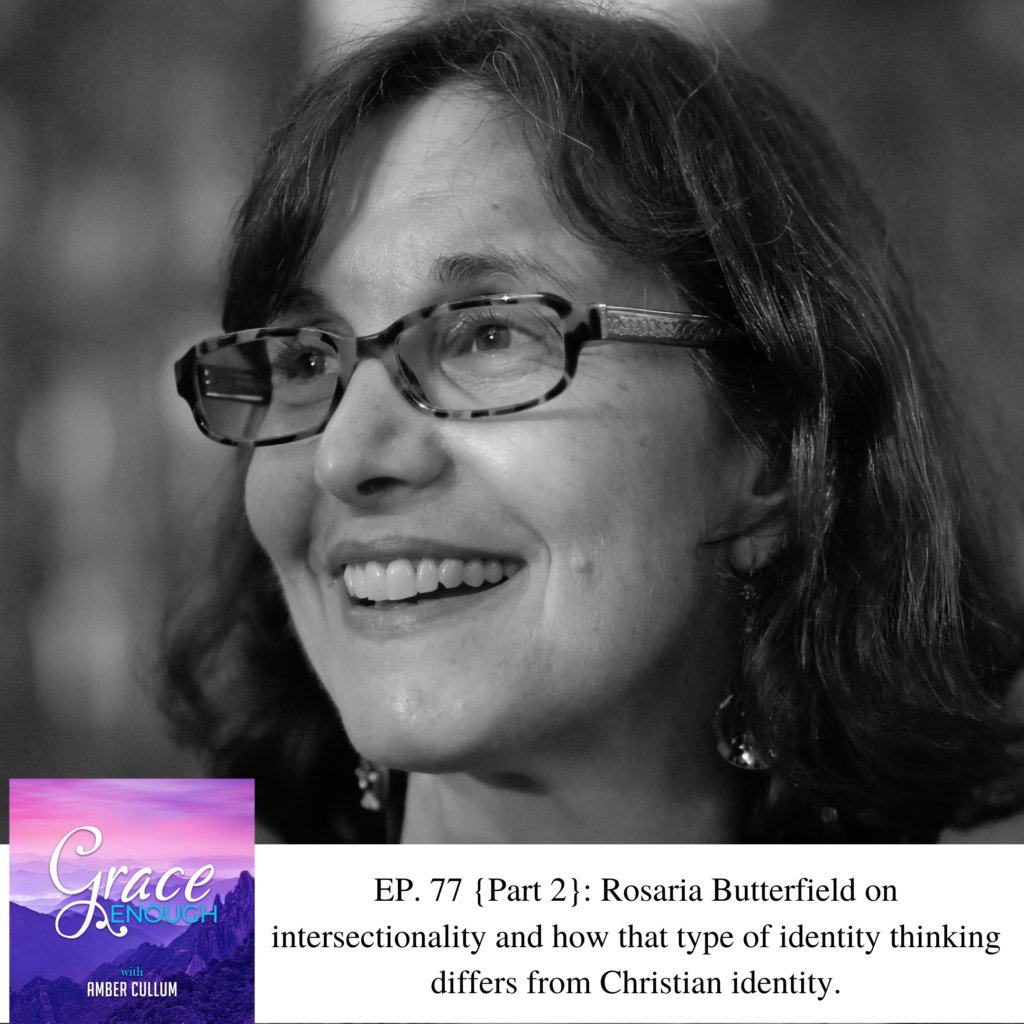 In her late twenties, allured by feminist philosophy and LGBT advocacy, she adopted a lesbian identity. Rosaria earned her PhD from Ohio State University, then served in the English department and women’s studies program at Syracuse University from 1992 to 2002. Her primary academic field was critical theory, specializing in queer theory. Her historical focus was 19th-century literature, informed by Freud, Marx, and Darwin. She advised the LGBT student group, wrote Syracuse University’s policy for same-sex couples, and actively lobbied for LGBT aims alongside her lesbian partner.

In 1997, while Rosaria was researching the Religious Right “and their politics of hatred against people like me,” she wrote an article against the Promise Keepers. A response to that article triggered a meeting with Ken Smith, who became a resource on the Religious Right and their Bible, a confidant, and a friend. In 1999, after repeatedly reading the Bible in large chunks for her research, Rosaria converted to Christianity. Her first book, The Secret Thoughts of an Unlikely Convert, details her conversion and the cataclysmic fallout—in which she lost “everything but the dog,” yet gained eternal life in Christ.

Rosaria’s second book, Openness Unhindered: Further Thoughts of an Unlikely Convert on Sexual Identity and Union with Christ, addresses questions of sin, identity, and repentance that she often encounters during speaking engagements.

In her third book, The Gospel Comes with a House Key: Practicing Radically Ordinary Hospitality in Our Post-Christian World, Rosaria explores how God used a humble couple’s simple invitation to dinner to draw her—a radical, committed unbeliever—to himself.

Rosaria is zealous for hospitality, loves her family, cherishes dogs, and enjoys coffee.

{Part 2} Rosaria and I dive deep into the topic of intersectionality and how that type of identity thinking differs from Christian identity.

“Most people did not realize that for decades and decades and decades, there’s been a conversation going on in the universities and that conversation basically is this, your identity is rooted in the things you don’t have that you want, and the things that you need to have in order to be fully formed. In other words, intersectionality comes from this idea that who you really are, is determined by how many victim statuses you can check off and liberation can only be had if no one disagrees with you.”

“But in 2015 in the Obergefell decision, which was the Supreme Court decision to legalize gay marriage in all 50 states, there was an additional, kind of beefing up of a clause that inserted this idea…of dignitary harm. This idea that people are harmed or done like violence to their person, not only because of material things that are denied them, but because their dignity has been insulted or hurt. So now with intersectionality, it isn’t just race, class and gender… it could be ageism and looksism.”

Intersectionality and The Church by Dr. Rosaria Butterfield

Intersectionality as Religion… It’s infecting evangelicals too by Denny Burks

“[I agree with Denny Burks], the two big issues with intersectionality is that it fosters an unbiblical view of human identity and it produces social fragmentation.”

“Gospel life does not necessarily promise that you will have a voice. It promises you belonging.”

“She said, ‘Who cares about your truth?’ She said, ‘Your truth hates my reality.’ And I will tell you I will never forget those words… Your truth, it violates and it hates my reality. And so how did we get to a place where it makes sense for a person to reject truth? Not because it’s false, but because it hurts?”

“If when we as Christians read the Bible, it doesn’t hurt we’re not reading it with the right posture.”

“My style is to have relationships that are as strong as my words. My words are pretty strong, but so are my relationships.”

The Mortification of Sin by John Owen

Four things you need to do with indwelling sin

“Categorize it properly. It’s a sin. It’s not an affection. It’s a sin. You can’t bring that sin to the cross and walk through the other side of it, because the blood of Christ does not make an ally to the sin it crushes on the cross.”

“What is true about the Christian life, is that folks are going to shoot arrows at you all the time. What is true is that God has given you more shields than Satan has arrows. And those shields often take the place of your brothers and sisters walking with you in real time, and that answers questions like, with whom do I eat dinner with whom do I vacation? Where do I move in when my depression is really bad? Those are answerable questions in the Christian life and there should be a clear, designated place.”

27:19 A friend of mine asked, What do we say to our college age kids when their comment is, ‘Oh, Mom, you know what it says in the Bible about that? It’s just kind of old. You know, it’s kind of like don’t eat the pork. It’s one of those things about homosexuality, that it’s not prescriptive, it’s descriptive’.”

“For whatever reason that child [possibly] went off to college not knowing about the difference between the judicial law and the ceremonial law and the moral law.”

The Westminster Confession of Faith

“I think you do need to understand that the moral law is still binding. So while the judicial code said a lot about the nation of Israel in the Old Testament…[and] it’s important to know it happened, but it’s no longer today…But the moral law is binding.”

Profiting from the Word by A.W. Pink

“What you need to understand is that before Peter denied Jesus three times with his mouth it was somewhere in his heart. It was there. So if you can’t stand somewhere on on clear truths of Scripture, well, that’s a big heart problem and your children will not be better off for it. Teach your children to love their neighbors. Absolutely…. Teach your children that there’s a difference between goodness and holiness.  Why is it that your neighbors who identify as lesbian can be the nicest people on the block? It’s called common grace.”

41:10 I have a friend whose mother has been a lesbian for a long time and she was curious if you had any advice for a Christian who has a lesbian family member or close friend when it comes to communication and relationship ?

“Just love your mom and don’t give up on her.”

You can listen to {Part 1} EP. 76: Rosaria Butterfield | Radical Hospitality.